And yes, History Channel is running a special apocalypse countdown on its History 2 channel on Thursday night! Obviously, History Channel is hedging its bets by running a program on doomsday prophecies on its main channel. And one scientist says he found Mayan calendar markings in Guatemala this year that clearly indicate the ancient Maya extended their calendars out 7, years from the year we know as No one but the ancient Maya themselves probably really understood the intricacies of their calendar system.

The descents of the Maya living in Guatemala are among the skeptics, and they are also upset that the doomsday folks are profiting from the prediction. More than , tourists were expected to come to the impoverished nation in advance of December But recent survey data show that 15 percent of Americans believe in some type of doomsday prophecy, and a look back at American history shows some widespread movements that firmly believed in the end of the world, as we know it.

In , the theologian Jonathan Edwards wrote about the apocalypse , at the age of He said the events would start about 7, years after the creation of the world. He was echoing predictions from Cotton Mather , another preacher who said the world would end in Mather updated his predictions until his death in A century later during the era of the Second Awakening, self-ordained prophet William Miller said that Jesus would return to Earth in March Miller spent 12 years prior to speaking about his prophecy, which he based on Biblical calculations. Miller had about , followers, and after some adjustments, the date was shifted to October 22, After the creation and destruction of four worlds, the universe had exhausted itself.

We live in the shadow of those real words; their echo, their chalk outline. In each of the four previous worlds, humanity was newly created by the gods. Present-day humans were not: we are the living dead.

In China, government’s denial of Mayan apocalypse is only fueling the paranoia

After the destruction of the fourth world, it lay in darkness for fifty years, until Quetzalcoatl journeyed into Mictlan, the Aztec hell, and reanimated the bones of the dead. In the four previous worlds, the sun was a living god. To build a new sun for this worn-out earth required a blood sacrifice: The gods gathered in the eternal darkness and built a fire, and their weakest deity, Nanahuatzin, a crippled god covered in sores, leapt into the center of the flames, and the sun was born.

The sun needs more sacrifices; it needs ours. This is why the Aztec priests slaughtered people by the hundreds, cutting out their hearts and throwing their corpses down the temple steps. This blood and murder was the only thing that kept the sun rising each morning; if they stopped even for a day, it would go black and wither to nothing in the sky, and without its light the earth would harden and crack and fall apart. A half-world, a mockery, a reality sustained only through death and suffering. The first four worlds were created by the gods and destroyed according to their wills or because of their squabbles, just like the four Yugas of Hinduism, or the creation of the Abrahamic God, whose Judgement Day will come whenever He sees fit.

The Aztecs were stone-age existentialists, trembling before their misbegotten freedom.

This is a theology for the anthropocene — our present era, in which biological and geological processes are subordinated to human activity, in which the earth that preceded us for four billion years is finally, devastatingly in our hands, to choke with toxic emissions or sear with nuclear bombs. And their response was to kill.

The Most Pathetic Preparations for the Mayan Apocalypse

Most everyone knows about the Aztec sun-sacrifices, the mass daily executions carried out by the priests, but ritual human slaughter was everywhere in their society. Sometimes children were drowned, sometimes women were killed as they danced, sometimes people were burned alive, or shot with arrows, or flayed, or eaten. Hundreds of thousands of people died every year. At the same time, these were the same people whose emperors were all poets, whose young people went out dancing every night, and whose cities were vast gardens filled with flowers, butterflies, and hummingbirds.

When the Spanish came to Mexico, they were horrified by the skulls piled up by the temples — but then they killed everyone, and we understand wars of profit and extermination too. But like any mirror, the Aztecs seem to show us everything backwards. Still, you can feel traces today. It might not be any good for the population at large, but it has facilitated a massive upward redistribution of wealth; the poor are scrubbed clean of everything, and the rich drink it up.

Class power creates both the excess of cruelty and the mythic ideology to justify it.

Does Anyone Really Believe in the Mayan Apocalypse? | Live Science

Marxist writers like Eric Wolf have tried to find something similar operating among the Aztecs: Human sacrifice cemented the rule of the aristocratic elites — they were believed to literally gain their powers through eating the sacrificial victims — while keeping the underclasses in line and the conquered peoples in terror. Something else might. The Aztecs built an extraordinarily sophisticated state. Their capital, Tenochtitlan, whose ruins still poke haphazardly through Mexico City, might have been the largest city outside China when Europeans first made contact; it was bigger than Paris and Naples combined, and five times bigger than London.

Stretching across the Mexican highlands, their empire had, in years, conquered or achieved political dominance over very nearly their entire known world, bounded by impassable mountains to the west and stifling jungle to the east.

The Roman Empire could never defeat their eternal enemy in Persia, and the dynastic Egyptians were periodically overwhelmed by Semitic tribes to the north, but until the day the Spanish arrived the Aztec monarchs were presumptive kings of absolutely everything under the sun. The only really comparable situation is the one we live under now — the unlimited empire of liberal capitalism, a scurrying hive of private interests held together under an American military power without horizon. We have our own flower wars. The United States and Russia are fighting each other in Syria — never directly, but through their proxies, so that only Syrians suffer, just as they did in Afghanistan, and Latin America, and Vietnam, and Korea.

There is a pathology of the end of the world: dominance, ritualization, reification, and massacre. 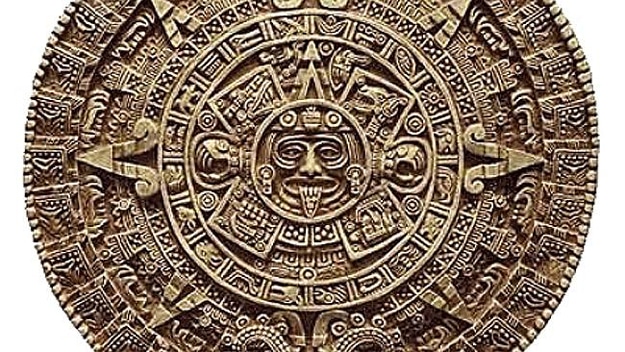 Tezcatlipoca, the supreme god, and the enemy of Quetzalcoatl. The Aztecs were not capitalists, but their economy has some spooky correspondences with ours. While they had a centralized state, there was also an emerging free market in sacrifices, and a significant degree of social mobility: every Aztec subject was trained for war, and you could rise through society by bringing in captives for slaughter. Sacrifice represented a hypertrophied form of potlatch, with humans playing the part elsewhere reserved for pigs.


In the sophisticated class society of the Aztecs, the grand triumphant waste was in human lives. We are, after all, assembled from the bones of four dead universes.


We were dead to begin with. Perched on the end of history, the Aztecs beheld a dead reality in which life becomes lifeless, to be circulated and exchanged. Four-and-a-half centuries later, Marx saw the same processes in capitalism. And this life activity he sells to another person [ The worker under capitalism, like the captive walking up the temple steps, is consecrated to death.

The Aztec world ended. When the Spanish came they found an empire of 25 million people; by the time they left only one million remained. Its people were killed with swords, guns, fire, famine, disease, and work. The beautiful garden-city of Tenochtitlan was torn down, a European fort built in its place.